This is the story of my experience with TorrentLeech in the last 2 months, with some very important morals and a tutorial how to implement RSS for Torrent leech with uTorrent.

Tired of reading and want to get going with it? jump to "First Step" section.

Well, after I've been waiting for it for few years, about 50 days ago, I finally got a TorrentLeech account,

Loaded with tons of self confidence, after managed to advance, get to high level and reputation in trackers like: IPT / tDay / Torrenting / ruTracker / DownRev / Fuzer / Hebits, I'm thinking only about 1 thing - 0-day

TL is mostly known for it's 0-day packages, a big collection of many types of downloads, assembled to 5 to 10 GB package.

I say , what the hack, I find myself a nice app 0-day package of ~7.3 GB  and very proudly press download (coming with my ~250 Mbps symmetric connection, I'm sure it will prove I'm invincible.

OPs in TL must have been sitting up there in the cloud and laughing.......

As I mentioned, after a lot of experience in other Trackers/Forums, I have learnt over the years that the tracker will credit you for the size of data you are sharing, the time you are sharing it, the number of torrents you are sharing etc.....

Well - TL isn't !!! this tracker doesn't care about anything, you can leave a 100 GB torrent for a year, it will do you no good UNLESS IT IS BEING UPLOADED !!!

How crazy is it for someone reached Gold Membership by seeding 155 torrent in a total size of 7 MB for few months and becoming a king???

Yes, dear world, this is the only Tracker/Forum I have found of (and I've made a research) that cares only about 3 things:

Furthermore, I have learnt the hard way.....

TL is measuring your RATIO!

Once the ratio is below 0.4 you get a nice alert saying something like "you've got a problem pal - fix or be banned...."

Oh, but you when you join, you get a kinda "Freshman's grace" , while your download is below 6 GB, Ratio is not measured.

Now, I suggest going back to the 2nd paragraph here and read again what I've done...... lol !

Yes, I got the BAN alert ~7 minutes after I joined TL - it must be some kind of record.

The moment it happens, I get a WhatsApp msg. from the friend who invited me (call him RF) in saying something like, "Hey, What The F*** have you done?", at this point I don't even understand whats' wrong, saying something like "hey, I'm a gold member in Fuzer, cool it man..."

So the ops in Chat window and RF keep telling me, only two things you can do: Cross-Seeding and Partial-Download.

Say What??? I thought I knew everything about trackers, "why?" , "where?" , "when?" and every 'wh question' I have in my lame vocabulary are running through my head.

The old Chinese story about the bird and the fox is saying "When your in deep shit,  shut up!", but me, I don't understand Chinese and can't shut-up, no matter what.

At this point I'm starting to fight for survival, I can fill the next 1000 words with my efforts but it will not change the fact I spent the next 3 weeks fighting blindly and somehow managed to raise my ratio to ~15% but actually dug  my hole deeper and deeper because I was in ~25GB of downloads and needed extra ~6 GB of uploads just to reach the sea-level, which seemed impossible at that point.

A week later, as I return from a business trip and realize I have a ban, I contact Chat and ask for grace, again.

Looking at my glorious history, my request is being escalated and after an hour of so, I get a message - "last time, you've got a week before you are banned, this time permanently".

Well, this is when I decide I need to investigate, learn the nature of this beast and try to beat it in it's own rules:

I spent more time learning about TL than I spent learning Python, I swear,

and here are the conclusions:

All through the process I hear about RSS and understand that "the strong are getting stronger" only by automating the downloads with RSS.

So I decide I'm learning how to use RSS in my computer to help me download, long research confuses me, I'm downloading many tools to create self-defined RSS from TL and nothing really working,

And then I find the answer in-house :  TL has an RSS service, containing the last ~100 torrents uploaded to the forum... That's it !!!

Playing with RSS in other trackers in the past I have learnt a thing or two about how it works and how to filter, manipulate the data in the RSS to download only what you need.

so..... the bottom line is at the bottom of this post , but first, why don't I share with the world my tutorial of how to master TL and get high Ratio and big Buffer:

First Step: in the Web-Site

Click your username in the top left corner of the web-page.

in the Edit tab page, scroll down to "RSS option" section and expand it.

Copy one of the URLs to your clipboard (select, CTRL-C or right click and choose copy), you will use it soon in the Torrent client.

Second Step: in the client (I'm using uTorrent, you may find the equivalents in whatever client you are using)

At this stage, you will see that a new  feed appeared in the RSS feed list (left panel of the client in my case)

clicking it shows all the latest torrents from TL (i've selected the last 100).

One more thing , an undocumented tweak:

Scroll down and locate "rss update interval" to 5  (this is the minimum possible interval in uTorrent), this might be very handy in getting a hot torrent as soon as possible.

Looking at the top torrents of the last week will clearly show you all the most downloaded torrents in the past week with the amount of downloads each had and the "added time" of each.

When I did it i found out that not only TV-series episodes are the most popular torrents, most of them are "HDTV" and "720 HDTV" releases.

So in my case I decided to embrace these type of torrents and make the my "Favorites" in the torrent client.

Open the RSS downloader from the client's menu, (in Utorrent through options menu or CTRL-R). 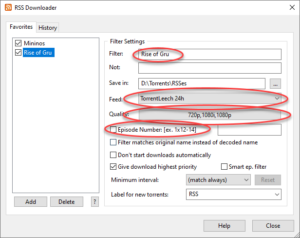 These steps helped me get:

Yes, I'm well aware of the fact that my amazing upload bandwidth had a lot to do with it but still, that's how it worked for me.

After I calmed down , uTorrent continue working for me, and I have reached a buffer of 350GB so far....

Going Easy , Downloading whatever I want , buffer is ~600GB